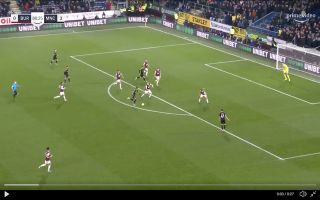 In the 86th minute of this evening’s Premier League clash between Burnley and Manchester City, goalkeeper Ederson sparked an opportunity after getting the ball upfield extremely quickly.

Bernardo Silva played the ball into Mahrez and the winger burst forward before tricking Ben Mee with some silky stepovers.

The 28-year-old created enough space for himself to get a shot off at goal. Mahrez drilled the ball into the bottom corner with a lovely strike.

Take a look at the Algerian star’s lovely effort below, courtesy of Amazon Prime Video and RMC Sport:

Manchester United may be quaking in their boots after seeing such a dominant performance from their cross-town rivals ahead of this weekend’s mammoth derby.