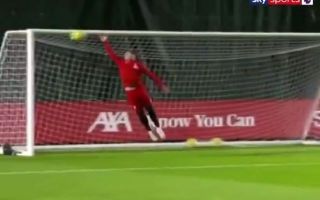 It doesn’t matter what level you play at, the goalkeepers will always tell anyone they could play outfield if they wanted to while the outfield players secretly want a chance to go in goal.

Obviously those rules don’t apply on a freezing cold night playing 5-a-sides with no gloves, but it usually seems to be the case when playing a full game.

This clip has emerged from Liverpool training where Roberto Firmino clearly fancies himself as a keeper, only it doesn’t look like he will be replacing Alisson any time soon:

Don’t give up the day job, Bobby…?

Roberto Firmino tried his hand at goalkeeping – against Sadio Mané no less! ?? pic.twitter.com/QrurTJ1D0t

It’s a decent strike from Mane, you want to see your keeper doing better in that situation. It’s not quite a case of “poppadom wrists” but he needs to get a stronger hand on the ball.