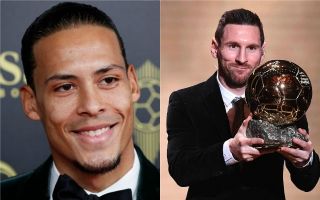 The 28-year-old was in fine company as he missed out on the award to Barcelona superstar Lionel Messi who won it for a sixth time, while Cristiano Ronaldo came in third.

SEE MORE: Liverpool team news: Boost for Klopp as he provides update ahead of Everton clash

Given how influential he has been for club and country over the past 12 months coupled with the level he has been performing at on a consistent basis, there is a strong argument for Van Dijk to feel bitterly disappointed that he wasn’t able to top the voting.

However, instead of hitting out at the result or showing his disappointment publicly at least, he has instead posted a classy message on social media as he offered his reaction to the ceremony and coming second in the race to land the prestigious award.

As seen below, the Liverpool ace paid tribute to all concerned including Messi and Ronaldo as well as his club and family, and there’s no doubt that he will try to come back even stronger and put his name in the hat for the 2020 edition of the award.

Time will tell if he is capable of deservedly taking the crown from Messi and other contenders as traditionally it has been difficult for defenders to win the award, but if there is one man who is best placed to do so, then it would surely be Van Dijk who continues to show his class on and off the pitch.

Now though, his focus will switch to Liverpool’s title hunt and ongoing pursuit of more major trophies after their Champions League triumph last season.