It’s not really clear why Ivan Rakitic went from being a key part of the Barcelona midfield to being an outcast, he didn’t suffer a huge drop off in form and he’s only 31 so it’s too early to write him off yet.

Whatever happened, it looks like he needs a move to a new club. He has made 13 appearances this year, but he’s averaging about 30 minutes a game so he’s been more of a sub than a first team regular.

“We’ll see. If the time comes to talk, everyone knows that I am delighted. I always said that if I ever repeated a shirt it would be the one from Sevilla. I wish it could be fulfilled one day, but above all I am glad course the club is taking, the results it has. It looks like a better Sevilla every year. From a distance it fills me with pride and joy. My dream would be to wear the Sevilla shirt again. ”

Usually a player will simply say an old club is doing well and he had a great time there, but Rakitic does go a bit further by stating his admiration for the club and his comments about it being a dream are particularly telling. 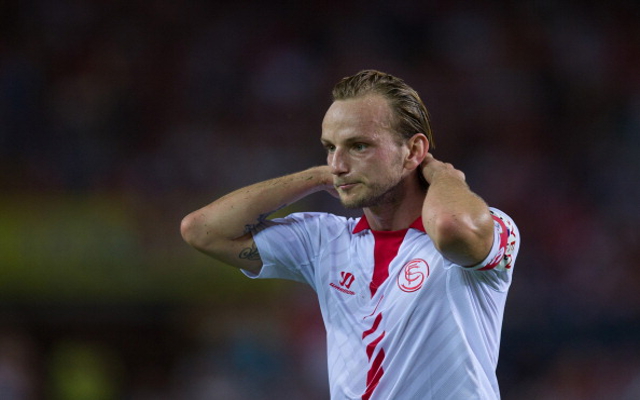 Rakitic in action for Sevilla

It’s not clear if Sevilla have tabled an offer at this point or when the move would happen, but it does look like he needs to move at some point soon.

It’s often said that players don’t want too much disruption before an international tournament, but this could be perfect for him. It would give him the chance to play regularly and return to comfortable surroundings, which has to be better preparation for Euro 2020 than sitting on the Barca bench.