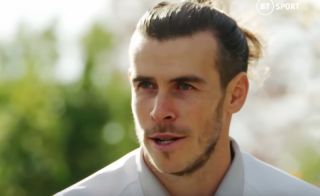 Real Madrid star Gareth Bale looks to have got a few Tottenham fans excited with his praise for their new manager Jose Mourinho.

The Wales international was a world class performer during his time at Spurs and has continued to shine despite some ups and downs in his spell in Madrid.

Watch the video below as Bale makes a real point of praising the appointment of ‘serial winner’ Mourinho at Tottenham, in what some fans think may be a transfer hint.

It remains to be seen if Tottenham would realistically re-sign Bale at this point in his career, but you couldn’t blame them for being tempted.

There was also recently some talk of this in a report from AS, so it’s little wonder this lot have reacted with excitement to Bale’s words…

"Spurs having Jose Mourinho there is an amazing statement from the club. He is a serial winner, Tottenham want to win trophies. I do not think there is a better partnership than Mourinho and Tottenham to try and win some trophies." Gareth Bale speaking to [@BTSport] Homecoming?? pic.twitter.com/s116cAlcxU

Scenes when he is Jose's first signing

Bale made me love Tottenham when he was there. I was a fan of Mourinho, I wish he could come back @GarethBale11 https://t.co/bFCSdcZfS1

If it’s a swap, this is a no-brainer. BRING HIM HOME.