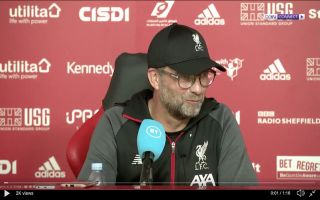 The England international is among the finest young talents in the world thanks to his performances for Borussia Dortmund. Sancho has amassed seven goals and nine assists in 19 appearances across all competitions this season so far.

The 19-year-old has been linked to Liverpool lately with the Independent claiming that the Reds are heavy favorites to sign him in January for a transfer fee of £100 million.

However, Klopp has played down such rumours. As quoted by Goal.com, the Liverpool manager said: “He’s a very good player. I have no clue where these kind of things [the rumours] are coming from, but it cannot come from us because we never speak about it. If we would be involved, nobody would know about it apart from a person who wouldn’t speak about it.

Sancho is a undoubtedly among the finest young footballers in the world and there’s no doubt that bigger clubs will be interested in signing him. However, Liverpool currently have a very strong attack with Mohamed Salah, Sadio Mane and Roberto Firmino. Hence, there’s little chance they’ll be willing to spend a chunk of money on someone who may end up on the bench.

That said, any club who manages to sign Sancho will benefit heavily.