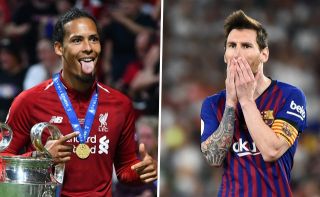 If you thought Virgil van Dijk was robbed of the Ballon d’Or this year, you may well have a point…even Lionel Messi’s mum didn’t expect the Barcelona superstar would win.

The Argentine maestro is of course one of the greatest players of all time, and it seems fitting that he’s now picked up this prestigious prize on six occasions, overtaking Cristiano Ronaldo.

Still, it’s arguably Van Dijk who had the better year in 2019 and of course helped Liverpool beat Messi’s Barcelona on the way to winning the Champions League.

Messi can perhaps count himself a little lucky on this occasion, with even his mum admitting she thought Van Dijk looked set to take the gong.

“I am very happy. We were not expecting this,” she told CNN Radio, as quoted by the Express.

“We thought the fifth had been the last. Honestly, this was a beautiful surprise. He (Messi) did not expect it either.