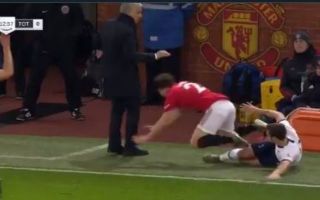 This was potentially inches away from resulting in a serious injury for Jose Mourinho on his return to Old Trafford.

Daniel James was sent sprawling after a poor challenge from Harry Winks, and he ended up clattering into Mourinho on the sideline.

A physical start to the match, Daniel James collides with José Mourinho. pic.twitter.com/TbtXPnNGIK

? Jose Mourinho picks up a nasty blow on the knee from a sprawling Dan James

It looks like everyone will be okay, James looks shaken up but came back on shortly after. As for Mourinho, if he got hit at a different angle or in a more direct way that could’ve caused some serious damage to his knee.