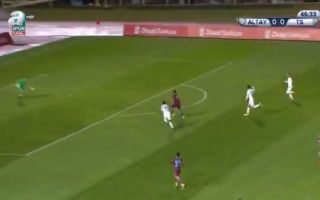 We don’t hear an awful lot about the Turkish leagues over here, so it’s fair to say that a lot of fans would’ve completely forgot about Daniel Sturridge since his Summer move to Trabzonspor.

It won’t surprise many to hear that he’s taken a bit of time to get over injuries and up to full fitness, but he’s showing some fine form for his new club. He’s notched two goals and two assists in his first five games, and just scored another with this lovely finish tonight:

The way he just calmly slots the ball past the keeper is fantastic to see, it’s the type of ice cold finishing that we saw from him at Chelsea and Liverpool.

It seems that injuries were the main thing that stopped him from becoming a success in the Premier League, so hopefully he can stay healthy and have a big impact at Trabzonspor.