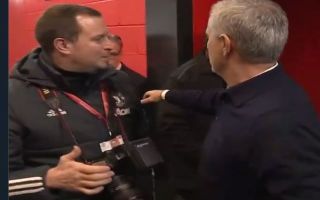 It will be fascinating to see how much longer the Jose Mourinho honeymoon period lasts. It still seems like everybody can’t get enough of him, but it’s only a matter of time before he loses his temper and tries to build an “us against the world” mentality within Spurs.

We recently saw some footage of Son Heung Min following him around like a lost puppy looking for a high five. Mourinho snubbed him on the first few attempts before finally giving in.

This footage from his return to Old Trafford might not be as bad, but you can see the look of despair in the man’s eyes as Mourinho ignores his first attempt:

Jose Mourinho is back at Old Trafford.#MUNTOT | #MUFC

It will be interesting to see what kind of reception he gets from the Man United fans tonight. His time there didn’t end well and it was clear his time was up, but the fans do tend to react well to former players and managers on their return.