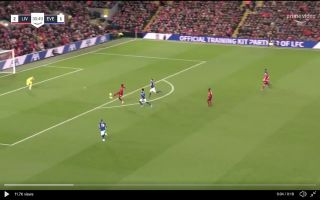 In the 30th minute of tonight’s Merseyside derby between Liverpool and Everton, centre-back Dejan Lovren launched a lovely ball over the top of the Toffees defence.

Jurgen Klopp’s men are really putting on a show at Anfield tonight.

Origi opened the scoring just over five minutes into the clash after a lovely counter-attack from the Reds.

Take a look at the 24-year-old forward’s superb goal below:

THE WAY DIVOCK ORIGI BRINGS THIS DOWN ?

What a pass from Lovren to Divock Origi! ? pic.twitter.com/1ZOGpnWtrL