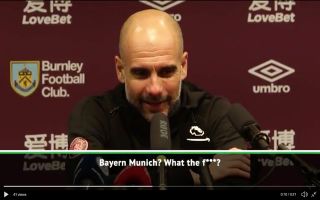 Manchester City manager Pep Guardiola couldn’t believe himself after he surprisingly confused the Citizens with his former club Bayern Munich.

After praising summer signing Rodri for his impressive performance in last night’s 4-1 win against Burnley, Pep bizarrely came out with “I think Bayern Munich…”

The Spaniard found his blunder hilarious, telling reporters “what the f**k” after his moment of confusion.

Take a look at the hilarious moment from last night’s press conference below:

It seems even the minds of the best managers slip from time to time.