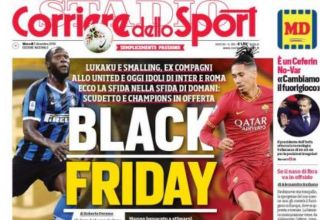 In an utterly baffling editorial decision, Italian newspaper Corriere dello Sport have sparked a major backlash over the headline on their front-page on Thursday.

Previewing the Friday night clash between Inter and Roma this week, the paper selected Romelu Lukaku and Chris Smalling as their key battle ahead of the encounter as the two former Manchester United stars face off.

However, the decision to run with the headline ‘Black Friday’ has unsurprisingly led to a shocked and disgusted reaction from many, as although it will undoubtedly have been meant as a play on words for the sales event, it is a completely inappropriate phrase to use in this context.

With Italian football blighted by countless racist incidents already this season, this is the last thing that it needs as it no doubt will do more damage to its image and reputation, if not domestically, most certainly around the rest of Europe and the World.

Time will tell if the paper issues an apology given the response that they have received or whether they will simply stand by it and plead their innocence, but with the official Roma Twitter account even hitting back at it as seen in their post below, it has sparked a real storm on Thursday morning.

Not a single soul: