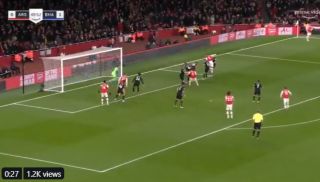 Arsenal have managed to get themselves level against Brighton tonight thanks to a looping headed goal by Alexandre Lacazette.

Watch below as the Frenchman heads in Mesut Ozil’s corner to make it 1-1 after Brighton had taken a surprise first-half lead at the Emirates Stadium.

It wasn't pretty, but Arsenal fans won't care one bit!

It remains to be seen if the Gunners can now come back and give Freddie Ljungberg his first win as caretaker manager, but they could really do with the three points tonight.

Unai Emery was sacked last week after their dire run of form, and they could make it nine games in a row without a victory if it stays like this.