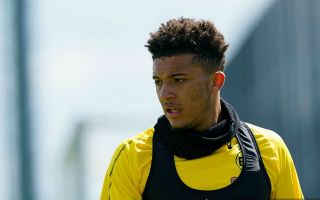 Manchester United and Liverpool may want to take note of claims being made about Borussia Dortmund winger Jadon Sancho.

The England international has long looked an exciting young talent and has recently been linked strongly with a move away from Dortmund after a difficult season.

This has all been detailed in a report from the Independent, who linked Man Utd and Liverpool as admirers of Sancho.

However, according to claims made on the Transfer Window Podcast, it seems there may be reason to worry about taking a gamble on the 19-year-old at the moment.

They cite sources in Germany who state that Sancho has come to regard himself as the Golden Boy of English football ever since making his debut for his country.

It’s also claimed this has led Dortmund to believe that, despite initially wanting him to see out this season, now could be the best time to sell Sancho as his value may soon drop from what it is at the moment, believed to be around €100million.

Jadon Sancho transfer talk continues, but could he be a risky signing for Manchester United and Liverpool?

While many top clubs will no doubt think Sancho’s talent is worth investing in, it does seem that there are attitude issues there that might mean he doesn’t quite fulfil his potential.

The former Manchester City youngster could, however, do well to return to England and would surely be a particularly useful signing for United in particular.

The Red Devils have been poor for much of this season and look in need of a big-name signing in attack after Alexis Sanchez never really worked out.

Liverpool don’t exactly look like they need someone like Sancho that urgently, but one imagines Jurgen Klopp would love to have a top talent like that on his hands.

The pacey and tricky wide-man looks ideal for LFC’s style of play and would obviously be a long-term investment for whichever club gets him.