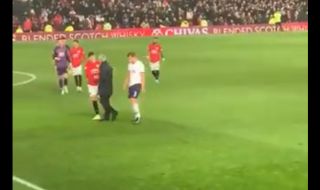 Tottenham manager Jose Mourinho showed he’s a class act on his first return to Old Trafford as his side lost to Manchester United on Wednesday night.

Watch the video below as Mourinho made the effort to congratulate Man Utd players after their 2-1 victory over his Spurs side – his first defeat since taking over the north London outfit.

Mourinho was not always Mr Popular during his troubled time with the Red Devils, but now that he’s gone, many fans seem to appreciate him a little more.

Ole Gunnar Solskjaer replaced Mourinho a year ago and has encountered similar difficulties at the club, with the team now arguably looking a great deal worse under the Norwegian tactician.