Chris Smalling and Romelu Lukaku have hit out at the shocking headline from Corriere dello Sport that’s been widely criticised today.

See below for an image of the front page of the Italian paper, which described the upcoming meeting between Smalling’s Roma and Lukaku’s Inter Milan as ‘Black Friday’. 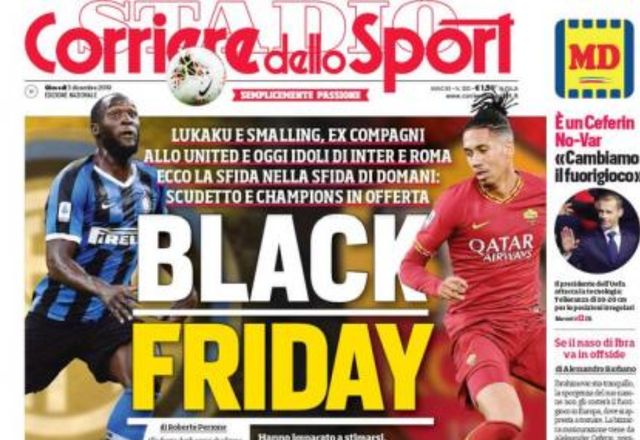 Needless to say, this is a poor attempt at a joke and is simply offensive and unnecessary, with Smalling and Lukaku understandably posting angry responses to Twitter this evening.

See below as Smalling tweeted a statement, slamming the ‘highly insensitive’ headline and urging the paper’s editors to be aware of the power their words possess.

Lukaku, meanwhile, also took to Twitter to hit out at Corriere dello Sport, slamming what he described as the ‘dumbest’ headline he’d seen.

The Belgium international joined Inter from Manchester United in the summer, while Smalling is on loan at Roma from the Red Devils.

Both players will no doubt have been appalled by some of the racist chanting that takes place in Serie A, with Italian football clearly in a bad way on these issues at the moment.

Roma have also come out in the last few minutes to confirm they’ve banned Corriere dello Sport from media duties with their club:

Following the publication today of the front page headline ‘BLACK FRIDAY’ accompanied by a picture of Chris Smalling and Romelu Lukaku, #ASRoma and @acmilan have issued an immediate ban to Corriere dello Sport.