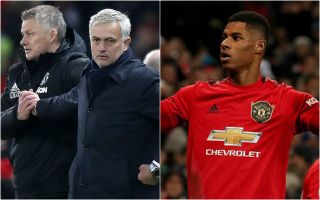 Manchester United manager Ole Gunnar Solskjaer and his coaching staff reportedly used old comments made by Jose Mourinho to inspire Marcus Rashford to prove him wrong in the game against Tottenham.

Mourinho was back at Old Trafford on Wednesday night with Spurs, and Rashford certainly put in a performance like he was a man with a point to prove.

The England international was superb, scoring twice in a 2-1 win for United, and this supposedly came after special work from Solskjaer and his staff in the build-up to the game, according to the Metro.

The report claims Solskjaer and his coaches reminded Rashford of comments made by Mourinho about him during his time as Man Utd manager, when he’d mentioned the 22-year-old as one of the players he didn’t feel was mature enough or brave enough.

MUFC fans will be thrilled to see Solskjaer working out a way to get Rashford to raise his game, with the youngster looking much improved of late.

It’s been a tricky few years for Rashford after coming through from United’s academy, having initially shone under Louis van Gaal before seeing his progress stall under Mourinho.

Playing under so many different managers can’t be easy for a young player, but it looks like Solskjaer may finally have worked out how to make him tick and get a reaction out of him.