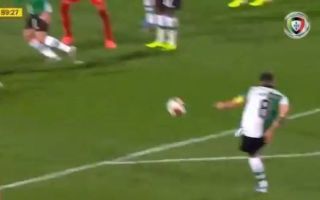 It’s always interesting to see how a player reacts to the disappointment of not getting a big transfer. Often they can become distracted and their form completely falls away the following season.

It’s clear that Bruno Fernandes loves being the captain of Sporting, but he was heavily linked with Man United, Real Madrid and Spurs in the Summer but no move ever materialised. It seems fair to say he hasn’t let it impact him at all.

He’s produced 11 goals and nine assists in only 19 games this season, so it’s clear he’s still producing incredible numbers for a midfielder. This free kick tonight was just the latest example of what he can do:

It’s in that position where it can be tough to get the ball up and down. It’s not hit with a lot of power, but the placement and curve is enough to beat the keeper.

Clearly his form is still at a level where it will attract attention, so it will be interesting to see if any teams decide to make another move for him in January or next year.