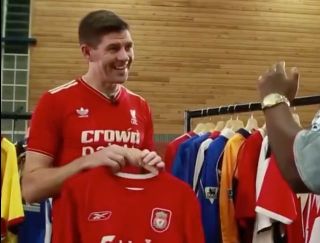 Steven Gerrard took a stroll down memory lane with BT Sport this week as he looked back on his stunning strike for Liverpool against Olympiacos.

The Reds went on to win the Champions League in 205 and while there was drama in the final against AC Milan, it wasn’t their first inspirational comeback in the competition that year.

SEE MORE: Video: Wijnaldum’s superb goal to make it 5-2 to Liverpool vs Everton

Gerrard scored a sensational 25-yard strike to turn things around at home against Olympiacos with Liverpool needing to find a third goal to advance, and in turn the club legend produced one of the most memorable moments of his career.

Speaking to BT Sport this week as part of their ‘What I Wore’ series looking back at famous jerseys over the years, Gerrard was asked about that goal as he also went on to describe it as one of his top three goals for Liverpool during what was a brilliant spell at Anfield, as seen in the video below.

As the current crop continue to chase history, Gerrard undoubtedly wrote his name into club folklore with priceless moments like the one seen against Olympiacos, and given the quality of that strike, it’s no surprise that it’s up there amongst his best efforts in his own personal opinion.

"In front of the Kop, you HAVE to keep fighting right to the end!"

Before Istanbul and AC Milan, there was Anfield and Olympiacos ?