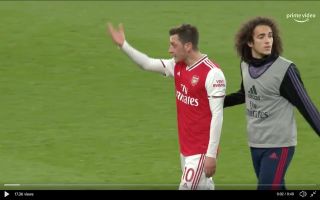 Ozil appeared to lash out whilst walking off the pitch, though it isn’t clear whether the World Cup winner was venting his frustrations towards fans or the Arsenal bench.

The 31-year-old assisted Alexandre Lacazette in the 49th minute of the clash with a pinpoint corner. The usual tale repeated itself though as the Gunners failed to keep the ball out of the back of their net.

Adam Webster and Neal Maupay scored to secure a historic first win at the Emirates for the Seagulls.

After failing to win any of their last nine games across all competitions, the north London outfit are now on their worst run of form since 1977 – Freddie Ljungberg wasn’t even born then.

Take a look at Ozil’s reaction to his side’s defeat below, courtesy of Amazon Prime Video:

Tempers flare at full-time… @OfficialBHAFC achieve their first ever away win at Arsenal, leaving the Emirates in stunned silence#PLonPrime #ARSBHA pic.twitter.com/17wY8Robit

Arsenal need a serious shake-up if they’re to get back on track anytime soon. What changes would you make to the team?