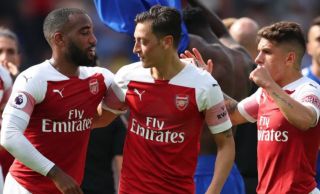 Arsenal could reportedly face a transfer concern as Napoli are said to have marked Lucas Torreira as a priority target for the January transfer window.

The Gunners saw their problems continue to mount in midweek after losing at home to Brighton in Freddie Ljungberg’s first home game in charge as interim head coach after Unai Emery’s sacking.

That result leaves them down in 10th place in the Premier League table after 15 games, and so they are certainly facing a problematic campaign as their hopes of securing a return to the Champions League for next season seem to be diminishing rapidly.

Time will tell who is brought in as Emery’s long-term successor, but Arsenal will perhaps need to move quickly to sort the situation out, not only to salvage something from this season on the pitch but also to avoid seeing key players move on amid all the uncertainty and disappointment.

According to Calciomercato, Napoli have identified Torreira as a priority for the January transfer window as he has been singled out by officials at the club as a signing that would strengthen the squad.

It’s noted that the Italian giants plan to make a move for him in the New Year and so Arsenal will have to be braced for a bid, while Atletico Madrid are said to be ready to offer competition for his signature as they are also seemingly keen on bolstering their midfield options.

It remains to be seen if tangible bids are indeed made in the New Year, but it’s a concern for Arsenal especially with their struggles on the pitch in mind. A return to Serie A could potentially be seen as a welcome escape for Torreira if results don’t improve between now and the opening of the January transfer window.