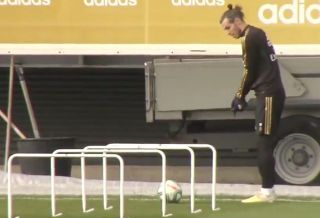 From his comments earlier this year to that Wales flag, Gareth Bale and his love affair with golf has made plenty of headlines in recent times.

While it’s fair to say that all the jokes and antics haven’t gone down particularly well with the Real Madrid faithful, it doesn’t seem to be putting Bale off as he’s done little to try to avoid coming under further scrutiny.

And that is likely what is coming his way in the coming days, as the video below shows a clip of him during a training session this week and he looked as busy practicing his golf skills as he was going through his football drills.

The Welshman is a doubt to feature in the upcoming games for the Spanish giants with an injury problem, one that could even keep him out of the side when they face Barcelona in the Clasico on December 18.

However, it’s not bothering his ability to make sure his golf swing is still on point, as this will undoubtedly be hilarious to many, while not so funny to the Real Madrid faithful…