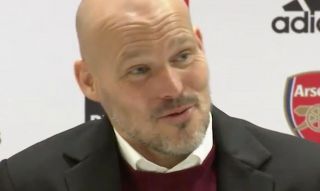 Some Arsenal fans were far from impressed with Pierre-Emerick Aubameyang during their defeat to Brighton at the Emirates on Thursday night.

The Gunners slipped to a 2-1 defeat as the visitors piled on more misery as Freddie Ljungberg saw his first game in charge at home as interim head coach end in bitter disappointment.

However, as noted by The Sun, Aubameyang seemingly infuriated some fans after he left the field for what was said to be a toilet break with his side chasing the game and needing a goal.

In fact, the Gabon international disappeared for a few minutes before making his way back onto the pitch, and his absence was certainly noted by many as per the report above.

Ljungberg did his best to downplay the entire incident though as seen in the video below, as he firstly insisted that he didn’t even notice Aubameyang was gone until he came back out on the pitch while emphasising that if he needed to go, he needed to go.

“He ran off and came back two or three minutes later,” said Ljungberg. “If you feel bad you feel bad, it’s nothing you can change.

“I actually didn’t even notice he went off, I just saw him come back on after he’d been off for a couple of minutes.”

It seems a bit harsh to hit out at the Arsenal man if he desperately needed the toilet as it would have just hindered his performance anyway. That said, with his side chasing the game and in need of some inspiration from their goalscoring talisman, it’s easy to see why some fans were left unhappy.

Freddie Ljungberg explains why Aubameyang ran off the pitch