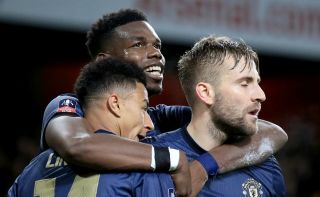 It won’t surprise anyone to hear that fans from both sides of the Manchester divide would prefer to see their own players in a combined XI, but this attempt from Sky Sports has raised a few eyebrows:

Only 3? @ManUtd players in Danny Mills’ combined XI – would you have more?

Fernandinho is obviously a great player, but it’s not clear if that’s an attempt to force him into the XI or if Danny Mills genuinely thinks he’s better than the other choices as centre back.

If he does think he’s better in that position than players like Victor Lindelof then that reflects badly on those who actually play at centre back every week.

The inclusion of Luke Shaw could also be a bit contentious. It’s more of an indication that City lack quality at full back than anything else. Shaw has struggled for fitness this season which has led to the much maligned figure of Ashley Young playing a lot of games, so it’s hard to say that would be a strength of this team.

These fans have also reacted on Twitter to Mills’ choices, particularly the inclusion of Luke Shaw:

Luke shaw?? Are you serious

This is a right stinker from sky sports. Amazon prime would never…

Luke Shaw? Is he pissed ? Williams won’t let him near that starting position in the coming months.

Mendy is better than Luke Shaw ?

The other interesting decision comes in the midfield area. Pep Guardiola is known for always having great midfielders and that does tend to be the strength of his team, but Scott McTominay has been outstanding at times this season.

The choice may come down to pure technical ability, with the three City players all being better with the ball than the Scotsman. Despite that, he’s vital to the Man United team and has really stepped up this season.

With Man City dominating the combined team and playing at home tonight, you have to think they are heavy favourites to win tonight. A positive result from Ole Gunnar Solskjaer could be a true turning point for United’s season if they can get one.