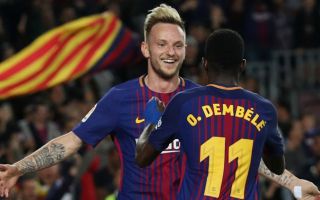 For as much as Barcelona have struggled at times this season, they tend to do fairly well at home. When you also consider that Mallorca usually struggle on their travels, Ernesto Valverde should see his team return to the top of La Liga tonight.

Barca are about to go through an intense run of games which will include a Clasico with Real Madrid, so it should be expected that some of the squad players will get to see some action over the next few weeks.

Jordi Alba is injured so the inclusion of Junior Firpo shouldn’t come as a big surprise, but Ivan Rakitic playing from the start is an interesting one:

The starting XI for #BarçaMallorca!

A recent report from AS featured some comments from Rakitic about a possible transfer and a possible return to Sevilla. He stated that a move back to Seville would be “a dream” so it’s fair to say that many expected him to leave the club soon.

As a result, some of the fans on Twitter have questioned the motivations of him starting tonight:

Just to increase his price before selling him in January

Most likely to raise his value to get more money of him when we sell him. That’s the best reason I can think of.

Is Rakitic been played to increase his market value in January? That would be an interesting move.

I want to believe they are trying to raise Rakitic’s value so he can gtfo in January, but knowing this board… https://t.co/1tuSfGbA3Z

It’s certainly a cynical point of view to take, so it will be interesting to see what impact this has on a possible January move. It would be remarkable if Barca were willing to risk playing someone in such an important game just to get a slightly higher transfer fee, so perhaps he has a chance to cement a place back into the team.

Time will tell, but if he continues to play throughout the month then it could hint that he’s staying around for this season at least.