It’s been said many times, but it’s difficult to come up with a combined XI for anything while trying to be completely objective.

As someone who loves Scottish football but doesn’t support either side, it should be easier but the temptation to try and keep it as even as possible always comes into it.

It’s fair to say this is the most evenly balanced that Celtic and Rangers have been since the Ibrox side were liquidated in 2012, but Neil Lennon’s side still has the most outstanding individuals throughout the team.

The biggest problem is trying to decide who should lead the line between Jermaine Defoe, Odsonne Edouard and Alfredo Morelos. The Frenchman got the nod in the combined line up here: 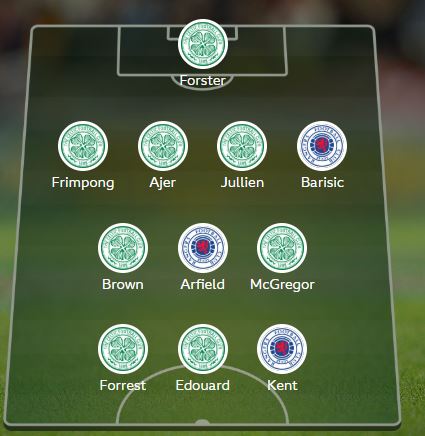 Obviously Rangers fans won’t agree with most of those choices, but let’s have a look at some of them in more detail.

The most glaring selection is the inclusion of Jeremie Frimpong over James Tavernier. It will seem harsh on the Rangers right back, but if you take his set piece ability out of it then he offers little to the team, he can even be seen as a liability due to his woeful defensive abilities.

Frimpong is still a bit of a wildcard, but his energy is utterly relentless. He’s able to get up and down the pitch at will and always looks to be going at full speed. It’s doubtful that Neil Lennon would be brave enough to turn him loose in a final against Rangers, but having a genuinely exciting right back in the team is always welcome.

The midfield three of Brown, Arfield and McGregor would be solid and still has plenty of attacking intent and goals in there. Steven Davis has also had a great season but it’s hard to overlook the Celtic pair.

Finally, the centre forward position. Defoe, Edouard and Morelos are all outstanding options who are playing well, but the Celtic striker does get the nod here. History counts against Morelos, he’s been sent off against Celtic in the past and has a tendency to play the occasion rather than the game and it hurts his team.

The Colombian has shown signs he’s matured greatly this year, but he needs to prove he can be trusted. Defoe seems like the ideal choice to come on late in the game to snatch a goal. He’s been prolific again this year but his age and lack of physicality could see him struggle to make an impact in this game.

Edouard is the most complete of the three and looks the best option at this point. He’s quick, strong, technically gifted and always seems to get a goal when it matters.

The game kicks off at 3PM on Sunday 8 December and can be viewed on BT Sport.