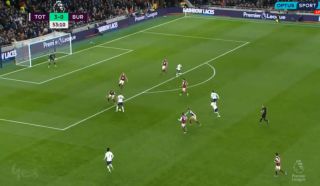 Harry Kane has scored another fantastic goal for Tottenham as they make it 4-0 against Burnley in this afternoon’s Premier League clash.

The England international opened the scoring early on in this game, scoring a long-range screamer to give Spurs the perfect start.

And now Kane’s done it again, wriggling past Burnley defenders before squeezing in a powerful shot just inside the penalty area.

It’s great play by Kane, who really looks confident and on form again after this difficult start to the season for Tottenham under previous manager Mauricio Pochettino, with the appointment of Jose Mourinho really seeming to lift the mood at the club.