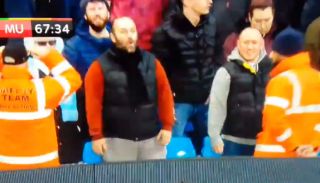 Watch below for the disgraceful incident, which appears to show one fan quite clearly mimicking a gorilla as United midfielder Fred approaches.

What's that gesture there?! ?pic.twitter.com/MBrK4KaJpy

Many fans have tweeted the video and are reporting it to the Premier League and anti-racist charity Kick It Out.

It’s unbelievable that we still witness scenes like this in 2019 and it seems increasingly clear that much stricter punishments need to be handed out for incidents like this.

Oh I do hope that’s not what I think it is @kickitout pic.twitter.com/sQ2dzIIWEO