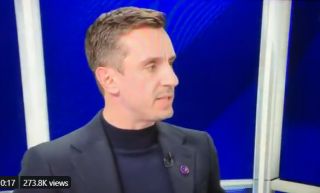 Manchester United legend Gary Neville has called out politicians for fuelling the rise of racism in football and society as a whole in this country.

The pundit, speaking after Man Utd’s win at Manchester City today, was responding to an incident which appeared to show a home fan racially abusing Red Devils midfielder Fred.

Neville believes racism is a problem in society as much as in football, and he seemed to single out prime minister Boris Johnson for some of his language surrounding this issue.

The former defender criticised the stuff he heard from Johnson in last night’s televised debates, saying: “You are watching the Prime Minister’s debate last night where he is talking about migration to this country, and people having to have certain levels.

“It fuels it all the time. It has got worse over the last few years in this country and not just in football.”

This is not the first incident of this nature this season, in what does certainly seem to be a worrying trend in the UK at the moment, with the BBC and others previously reporting on a rise in racism since the 2016 Brexit vote.

This is also not the first time Johnson himself has been singled out for fuelling racism, as UEFA president Aleksander Ceferin has done in recent times, as reported by the Daily Mirror.

Can't believe I am saying this but Gary Neville is spot on. https://t.co/T1OQ92uLo1

Gary Neville has this spot on! https://t.co/DY4s2zRABv