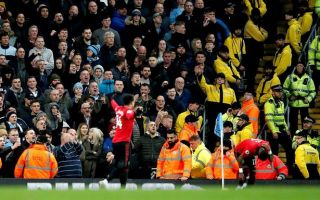 Manchester United star Jesse Lingard has slammed the Manchester City fan who appeared to racially taunt him and Fred during today’s game at the Etihad Stadium.

One City supporter could be seen seeming to imitate a gorilla, with City later releasing a statement on their official site condemning his behaviour and insisting they are now working with police to find him, and that fans engaging in this kind of behaviour will be banned for life.

It’s certainly depressing to see stuff like this going on in 2019, with a report from BBC Sport in the summer stating anti-racist charity Kick It Out say incidents like this rose by 43% last season.

Lingard called this fan out with a tweet after today’s game, which United won 2-1 thanks to goals from Marcus Rashford and Anthony Martial.

Not even this idiot can ruin tonight’s feeling, shameful behaviour, it may be the derby but there is never ever a reason to be racist! https://t.co/tLegPkBIG4

Lingard dubbed it “shameful behaviour” from an “idiot” and insisted it still won’t stop him enjoying the result.

The Red Devils were good value for their win, which looks to have dealt a huge blow to City’s fading title hopes, as they now sit 14 points behind league leaders Liverpool.