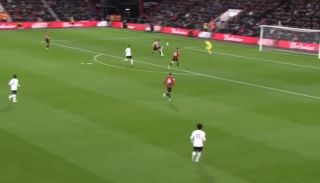 Liverpool have gone 1-0 up away to Bournemouth this afternoon thanks to a beautifully worked move finished off by Alex Oxlade-Chamberlain.

Watch below as the England international gets a good connection on a glorious long ball from Reds captain Jordan Henderson to make it 1-0 away to Bournemouth.

What a fantastic pass from Henderson to set up Ox for the goal. Top draw quality! pic.twitter.com/ZYU3UfVcZD

Liverpool look unstoppable at the moment, and will be hoping to hold on to all three points today as there could be a chance of title rivals Manchester City dropping points against Manchester United in their game later on.

If Henderson and Oxlade-Chamberlain can continue to combine like this, it should be another very good afternoon for Jurgen Klopp’s side.