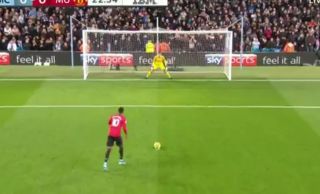 Watch the goal video below as the England international confidently slots home past City goalkeeper Ederson to put Pep Guardiola’s side in real trouble once again.

With Liverpool winning again earlier today, City badly need a victory against their rivals in this game if they are to give themselves any hope of staying in the title race following plenty of dropped points already this season.

Rashford is in fine form at the moment, having also scored a brace in United’s midweek win over Tottenham.

Rashford opens the scoring from the spot. #mufc pic.twitter.com/S5Tflg082Y