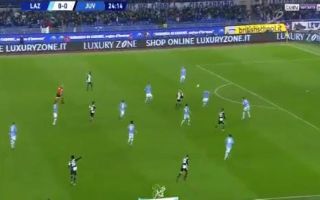 And suddenly everything seems to be okay with Cristiano Ronaldo and Juventus again. He’s been struggling with some poor performances and being substituted, but he looks hungry and back to his best tonight.

The finish might be one of the easier ones he will have this season, but the goal is all about him dropping into space to play his teammate in. He shows his athleticism to be the player to then get on the end of the cross to put Juve ahead against Lazio:

WHAT A PLAY BY RONALDO AND FINISHES IT OFF!

Cristiano Ronaldo opens the scoring with his first goal from open play since October ?

He was unlucky not to grab a second later in the half when his diving header was well saved. Lazio managed to grab an equaliser on the stroke of half time, but you wouldn’t bet against Ronaldo finding at least one more when he’s playing like this.