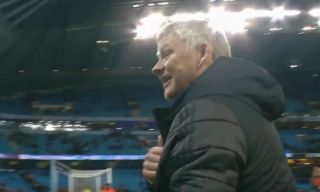 The Red Devils beat their rivals 2-1 at the Etihad. Goals from Marcus Rashford and Anthony Martial put Manchester United 2-0 up before Nicolas Otamendi headed in City’s solitary goal.

Keana hailed his former team’s performance, saying that all the players were outstanding. Speaking on Sky Sports, the former Red Devils captain said: “I absolutely did not see this coming. It was fantastic – a proper Manchester United performance. Lots of bravery and personality. They were outstanding. I don’t think beating Tottenham was a big deal at home, but that win today will give the players a lot of confidence as they have been criticised – nobody likes to be criticised.

“But hats off to Manchester United, whatever happens in January with the speculation, question marks over Ole, they were outstanding. This was a Manchester United performance.It wasn’t all about how they countered attacked, it was how they managed the game, got blocks in and showed personality. I really enjoyed watching them – it’s what Manchester United is all about. But the key is to be consistent, week-in, week-out. Hopefully these young players will pick up on that.”

Manchester United have done really well against top teams and yesterday, they were sensational against a strong City team in their own backyard. This win will undoubtedly boost the players’ spirits ahead of the upcoming matches.

The Red Devils have gone up to fifth in the Premier League table but could slip to sixth if Wolves beat Brighton at the Falmers stadium today.

Manchester United’s next match is their final Europa League group game against AZ Alkmaar on Thursday. After this, Solskjaer’s side play Everton next weekend.