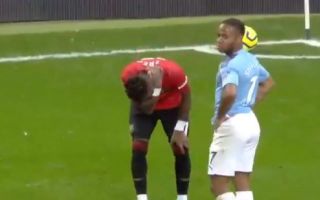 It’s quite easy to take an isolated clip and try to turn it into something it isn’t, but this isn’t a great look for Raheem Sterling.

Admittedly he’s had a lot of rubbish to put up with in the past, but you would think that might make him more likely to help out a fellow professional when he’s being targeted by the fans.

In actual fact, he stood by and left it to other players to help out Fred as the City fans pelted various objects at him:

PRaheem just standing there doing nothing whilst Mahrez and David Silva check he’s okay and tell the city fans to stop pic.twitter.com/DalTAoq67G

Raheem Sterling’s reaction to Fred being racially abused is absolutely shocking considering he is the poster boy for kicking out racism.

Fair play to Mahrez and Silva though! ? #mufc

It does look like a lot of fans on Twitter are tearing into Sterling for his response while Mahrez and David Silva stepped in to comfort Fred and asked the fans to stop it.

Sterling has been vocal in the past about kicking this kind of thing out of the game, so it’s never going to be a good look if he does nothing when it’s an opposing player.

Like I said, it’s easy to take this out of context, but it’s also important to lead by example and practice what you preach, which he doesn’t appear to do here.