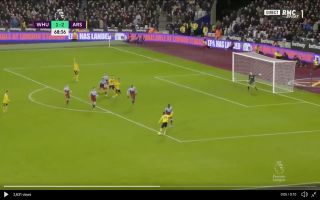 In the 68th minute of this evening’s Premier League clash between Arsenal and West Ham, superstar Mesut Ozil picked out Pierre-Emerick Aubameyang in the box with a pinpoint pass.

The Arsenal captain used a lovely touch to get away from two West Ham defenders before playing the ball into Nicolas Pepe with a fine back-heel pass.

The north London outfit’s marquee signing then lifted the ball back into his skipper with a lovely lob and Aubameyang fired the ball into the back of the net with an acrobatic volley.

Take a look at the forward’s goal below:

This goal by Pepe reminds me of a certain Van Persie. This is exactly what he needs to always do, take a shot at goal. Martinelli was actually my man of the match. His goal brought us back.

Something certainly clicked after Martinelli’s equaliser, this was the third goal from the Gunners in less than 10 minutes.