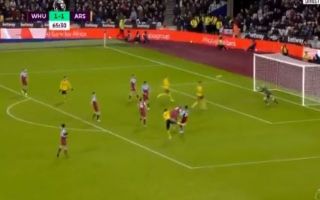 It takes a certain type of player to thrive on being a club’s record signing. You need to enjoy the pressure that will come with the big price tag and also have unshakable confidence if it’s not going well.

The BBC reported that Nicolas Pepe joined Arsenal for a club record fee of £72m this Summer for Lille. He had the inflated expectations to deal with but might also have known he could face unfavourable Gervinho comparisons if it didn’t go well.

It’s not been a great start to his time in England, but he finally stepped up with a decisive contribution against West Ham tonight with this finish:

Nicolas Pepe has shocked everyone by scoring this goal. What a goal. ? pic.twitter.com/WEASXJd176

It’s the kind of goal he scored regularly in France so Arsenal fans will hope this gives him the confidence to kick on from here.