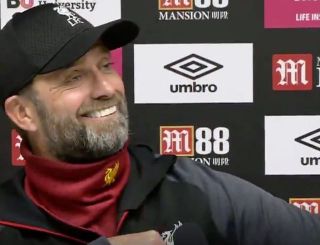 There’s never a dull moment with Jurgen Klopp, and this reporter found that out about the Liverpool boss over the weekend it seems.

Speaking at his post-match press conference, the German tactician was interrupted as one of the phones in front of him recording his responses began to ring.

SEE MORE: Good news for Liverpool as Klopp could get double fitness boost vs RB Salzburg

Hilarity ensued as seen in the video below, as he looked at the phone and was rather amused by the name that had flashed up on the screen.

While we’ve seen other managers lose their temper with reporters in the past for being interrupted, it’s as you expect from Klopp as he makes light of the situation and has a little laugh about it himself before handing over the phone and getting back to business.

Naturally, he was in a good mood anyway as his side had just secured a 3-0 win over Bournemouth to continue to lead the way with a comfortable cushion at the top of the Premier League table.

However, when you see clips like this, it’s hard not to love the Liverpool manager’s humour and relaxed approach to life…

Jurgen Klopp was interrupted by a phone call during his post-match press conference this weekend by a very special phone call! ? pic.twitter.com/L41WdTyi7J