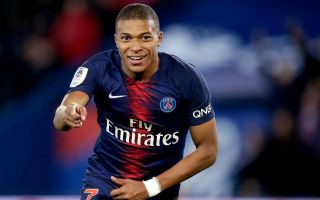 We’ve seen it many times over the years with Real Madrid, they don’t just spring a surprise and make a big signing out of the blue, everything must be played out in the media for months if not years before as they slowly wear a club down.

It seems the latest big target for Real Madrid is Kylian Mbappe. PSG may be one of the most difficult clubs in the world to buy from simply because they don’t need to take the money, so they would need to be convinced that they have no choice but to let him go.

According to a report from Marca, there’s a few things starting to go in Madrid’s favour in this chase.

Firstly they point out that he’s been noticeably unhappy in his last couple of games, he was subbed against Montpellier at the weekend and completely refused to acknowledge the manager despite multiple attempts.

That’s only a small thing, so the issue with his contract is where the real boost comes for them. They indicate that he is still tied down until 2022, but there’s multiple obstacles that are preventing him from signing a new deal.

It seems that first of all he wants parity with Neymar in terms of his wage, which they quote Le Parisien as saying that would represent a wage of around €25m per year. For as much as PSG have plenty of money, financial fair pay is still in existence so paying both players that much money could limit what they can do with the rest of the team.

Will he end up in Madrid?

The bigger obstacle might be the club being able to match his ambitions. They say he wants to win the Champions League and the Ballon d’Or, while also rising up to rival Lionel Messi as the best player in the world. It’s certainly easy to argue that he would have a much better chance of doing that in Spain.

Nothing has been agreed for now, but this could take a couple of years to play out. The main hope for Real Madrid must be that he doesn’t sign a new deal. PSG may not need the money, but they would still prefer a big fee to losing him for nothing in the Summer of 2022.