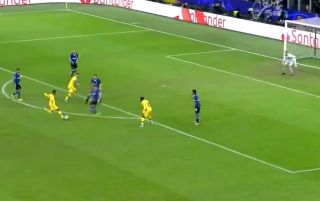 Ansu Fati broke Inter hearts with his late goal for Barcelona as it effectively resulted in the Italian giants crashing out of the Champions League.

It came down to the final round of group fixtures to determine whether it would be Inter or Borussia Dortmund who would join the Catalan giants in the last 16 of the competition.

While Dortmund did their job with a win over Slavia Prague, the Nerazzurri couldn’t see off the reigning La Liga champions who signed off on the group stage in style with another win.

Carles Perez had given them the lead at the San Siro only for Romelu Lukaku to find a crucial equaliser just before half-time to set up an interesting second half.

Despite plenty of pressure and two goals ruled out for offside for Lautaro Martinez, Inter simply couldn’t find a way through for a second time on the night and eventually they were made to pay.

As seen in the video below, Fati struck in the latter stages of the encounter to restore Barcelona’s lead and he did so with a brilliant strike from distance which curled into the bottom corner to beat Samir Handanovic.

In the process, the 17-year-old became the youngster ever player to score in the Champions League, as per the tweet from ESPN below, as he continues to enjoy a memorable breakthrough campaign.

Barcelona march on but it was bitter disappointment for Inter and Antonio Conte as their stay at Europe’s top table is over for this season.