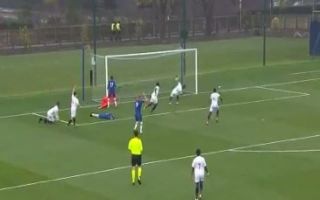 The Uefa Youth League doesn’t tend to get a lot of attention unless something magnificent or crazy happens – this might be both.

There’s so much that happens in a short space of time here, so it can take a few views to actually figure out whats happened.Firstly it looks like the keeper makes a great save onto the post, only for the ball to rebound to the Chelsea player a couple of yards out and leaves him with an open goal.

Somehow, he manages to hammer the shot onto the bar and it looks like it’s about to cannon out to safety for Lille, only for it to smack into the face of a defender and it dribbles back towards goal.

It even looks like the keeper manages to save it again, but the goal was given:

One of the worst misses and strangest goals we’ve seen in some time! pic.twitter.com/gaFDemdHeo

Hot off the press, here’s a wonderful comedy of errors ending in a Lille own goal against Chelsea in this afternoon’s UEFA youth league game.pic.twitter.com/5ZQgIpg5F0

Some of the services that provide live updates from the game have very generously tried to award this as a goal to the Chelsea man, but that is an unfortunate own goal all day long.