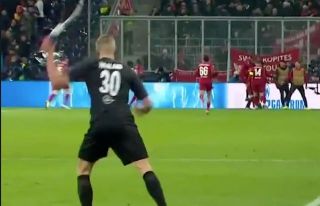 It was a night to forget for RB Salzburg and Erling Haaland on Tuesday as they fell to a 2-0 defeat to Liverpool and crashed out of the Champions League.

The visitors needed just a point to secure their place in the knockout stage, and having collected all three, they will be joined by Napoli in the next round.

Salzburg will drop down to the Europa League, and they’ll hope that talismanic forward Haaland will fire them towards that trophy instead.

However, it was a frustrating night for the hosts and Haaland in particular as he wasn’t able to continue his prolific form in the competition as Salzburg drew a blank.

As seen in the video below, his frustration boiled over as he could only helplessly watch on as Mohamed Salah doubled Liverpool’s lead as he was given a bottle of water only to throw it down to the ground in anger.

No doubt Liverpool fans will be delighted that they were able to shackle him and deny him a chance to have a decisive impact, and this reaction just shows how well the backline kept him under wraps as he was left bitterly disappointed…

Erling Haaland grabbed the bottle just to throw it away ? pic.twitter.com/h1HJE2qODX

Erling Håland asked for a bottle JUST so he could throw it in frustration ??

He was fuming after Liverpool scored their second of the night… pic.twitter.com/CJZOCPkI0R