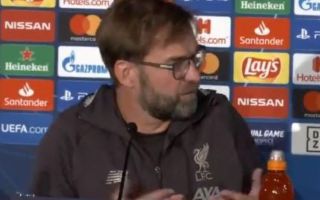 When something is being translated you always expect something to get slightly mixed up and misrepresented, but it could be more sinister if someone completely changes the meaning of what you said.

Who knows if this German speaking reporter was deliberately trying to twist Jordan Henderson’s words or not, but he seems to forget that Jurgen Klopp, an actual German man who speaks German and won’t take kindly to someone doing that to one of his players, is sitting right next to him.

READ MORE: Liverpool are in talks over a potential money spinning friendly next Summer

As you would expect, the Liverpool boss is furious about it:

The best thing about it is when Klopp acknowledges that Henderson has just said all the basic media trained lines that don’t really mean anything, yet the German reporter has still tried to make it sound like he thought it would be easy.

Only that guy will know what his motivations were, but it’s unlikely he will ever want to cross Jurgen Klopp again after a very public chastising.