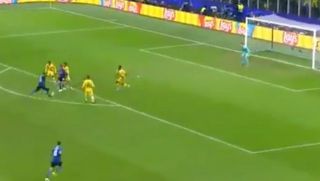 Inter fell behind at home to Barcelona in their Champions League clash on Tuesday night as they were at risk of crashing out of the competition.

With rivals Borussia Dortmund vying for second spot in the group, the Nerazzurri couldn’t afford to slip up and would have been under pressure after Carles Perez opened the scoring for the visitors.

However, they found a way back into the game before half-time as Lautaro Martinez and Romelu Lukaku linked up brilliantly up top.

As seen in the video below, Martinez showed great strength and fight to win his tussle with the Barcelona defence to hold the ball up as Lukaku made up ground to offer support.

With the ball breaking into his path perfectly, the Belgian international produced a top strike to beat Neto from outside the box, although replays showed that it took a deflection on its way in.

It may well have been heading in anyway, and so Lukaku continues his prolific start to life for Inter while the Italian giants are still alive in the scrap to advance to the last 16.

I Nerazzurri are level with Barcelona just before half time!#OptusSport #UCL pic.twitter.com/Fu0GXZhZJe