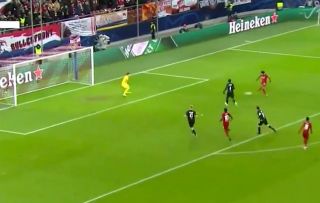 Liverpool were involved in a crunch encounter with RB Salzburg in the Champions League on Tuesday night, and they could have put themselves in a strong position early on.

The Reds started the night top of the group but needed to avoid defeat against their rivals in order to advance to the knockout stage of the competition.

It certainly wasn’t going to be easy given the quality that Salzburg have shown so far this season, and the visitors had an ideal opportunity to break the deadlock and put themselves in a commanding position.

However, as seen in the video below, Mohamed Salah got it all wrong as after a brilliant sweeping move from Liverpool to carve open the Salzburg defence and present a great chance to their talisman, he couldn’t match it with a finish as he snatched at it and sent his effort wide of the post.

The Egyptian international will no doubt be bitterly disappointed not to have made the most of the chance, and he seemed to be off the mark in general in the opening 45 minutes as he struggled to pounce and find the back of the net despite having some great opportunities to do so.

How on earth did he miss this?!