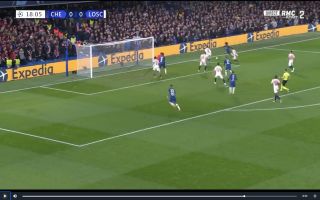 In the 18th minute of this evening’s crucial Champions League encounter between Chelsea and Lille, Stamford Bridge was sent into overdrive after Tammy Abraham hit the back of the net.

Tireless midfielder N’Golo Kante played a superb chest pass into Christian Pulisic’s path and the American star charged forward before laying the ball off to Willian.

The veteran winger beat his man before drilling a low cross into the box, leaving Abraham free to tap the ball into the back of the net.

Take a look at the England international’s opener below:

A big, big goal for Chelsea! ?

Tammy Abraham makes no mistake to set the Blues on their way… pic.twitter.com/v78SYFQ5Cv

Lampard’s men need to win in order to seal their qualification for the knockout stages of the Champions League.

Abraham’s early opener has set them on their way.