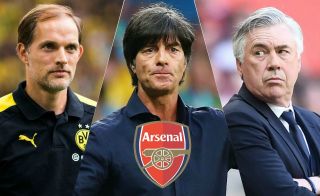 Arsenal could reportedly see their plans affected by the availability of Carlo Ancelotti following his sacking by Napoli.

The Italian tactician has just been dismissed by the Serie A side after a difficult start to this season, despite securing his side’s place in the last 16 of the Champions League with a 4-0 win over Genk on Tuesday evening.

MORE: Arsenal tipped to interview up to 10 candidates in search for Unai Emery successor

Ancelotti has long been one of the biggest names in football management, having won plenty of honours in a long and distinguished career at the highest level of the game.

According to the Telegraph, his availability is now expected to grab Arsenal’s attention, despite Mikel Arteta previously looking the favourite to replace Unai Emery as manager at the Emirates Stadium.

The report adds that Everton may also line up an approach for Ancelotti following their recent decision to sack Marco Silva.

That would be a big-name appointment for a club of Everton’s size, so it remains to be seen how realistic this move would be.

Ancelotti would surely favour Arsenal if they do show a strong interest, so it will be intriguing to see how this saga plays out in the coming days.