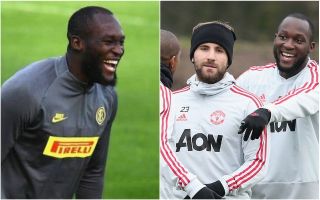 The England international perhaps took a bit of pleasure in seeing Lukaku, who left Man Utd for Inter Milan this summer, drop out of the Champions League and back into the Europa League so quickly, where he joins the club he left only a few months ago.

The Belgian striker will no doubt have felt he’d made a move up after quitting Old Trafford for the San Siro, but it was short-lived as Inter were dumped out of Europe’s top club competition following their defeat to Barcelona on Tuesday night.

Shaw managed to find an old tweet of Lukaku’s that made reference to playing in the Champions League, which he quoted and added a simple reply: “Welcome back” following a winking emoji.

Shaw hasn’t got a lot right on the pitch for United in recent times, but Red Devils fans will surely love this quality Twitter game from the former Southampton man.

It will now be interesting to see how well this goes down with Lukaku and if he decides to respond.

Things could also get very interesting if these two teams end up playing each other in the Europa League later this season!