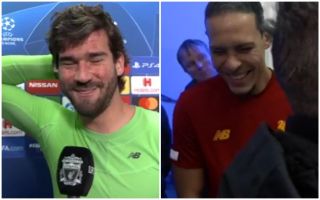 It was a big night for Liverpool in the Champions League as they won 2-0 away to Red Bull Salzburg to secure their place in the knockout stages of the competition.

It seems Van Dijk was in a good mood afterwards as he decided to hijack Alisson’s interview by switching the lights on and off over and over again to try to put the Brazilian goalkeeper off.

Both players saw the funny side, and LFC fans will no doubt love getting this little glimpse into how good the mood seems to be at the club at the moment.